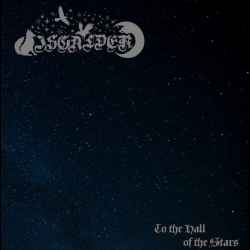 ISGALDER - To the Hall of the Stars DIGI A5

Hellthrasher Productions proudly presents the debut EP of Germany's Isgalder on A5 digipak CD (lim 200).
Isgalder (translated from Old-High-German as „icy chant“ or „cold incantation“) was founded in mid-2017 by Grimwald (Dauþuz, Wintarnaht) – vocals/guitars, and Moppel – drums/bass/keys. Hailing from the Thuringian Forest, the band emerges with a splendid piece of epic pagan black metal influenced by early Falkenbach and Bathory. Their debut EP tells a little story about the journey of a man, wandering old forgotten paths in search of nature and solitude. The journey to the hall of the stars...

"Throughout To the Hall of the Stars, Isgalder does a great job of balancing their more near serene and mystical atmospheric qualities with their more ripping and face melting black metal tendencies utilizing each to their fullest potential." (Cadaver Garden)

"This is a super-exciting release from Isgalder, one that delivers on its promise of pagan-infused black metal." (GBHBL)

DECAYING - One To Conquer LP (BLACK)